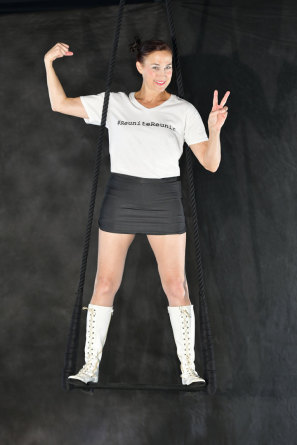 As Artistic Director and choreographer for 6 Degrees, I create spoken word, theater, aerial, and dance works  I am driven by the idea that art holds the ability to shift cultural paradigms. By giving varied perspectives on societal and cultural beliefs through my art, I strive to change society’s belief systems that one set of rules should apply to everyone.  I think these belief systems not only lock us into harmful patterns; they keep us closed to the evolution of ideas and behavior, therefore blocking our full potential.  Children, women, men, humans - we are a diverse species with infinite choices, each specific to ourselves. I believe that true change comes from the individual, and by extension, society and culture.

I have 30 years sober and worked for 7 years in an adolescent treatment center. These life experiences define my art content with two ideas:  1) My art is embedded with the belief that human understanding, interaction, and tolerance is the purpose of human existence and catalyst for growth, and 2) humor is the best medicine.

Why 6 Degrees? (I get asked this all the time.)

My company name, 6 Degrees, and my work reflect the central theme of human connection and relationships as the healing component of human adversity.  Since 1999, I have created and produced eight evening-length concerts and over 20 repertory works on variations of this theme.  My first concert, It’s All Relative (2002), addressed belief systems, archetypes, and the generation gap through the eyes of my Italian family.  CRACKED (2006 and an encore in 2016) tackled how women have been conditioned to obsess on their bodies and sex through family, society, religion, and media enforcement, and the consequences of that conditioning on women. Tetris (2009) portrayed the despair and isolation of a confused generation against a backdrop of the 80-90’s, reflecting on comparisons of life decades ago to current issues of today.  In familiar themes (Why buy the milk when you can have the cow for free?) lies a subtext of fear, a lack of human tolerance and understanding, and mass inertia.  Baptism (2010) and Regifting Lions (2012) asked the question of environmental circumstance vs personal will; why certain individuals can recover from mental and physical illness and others cannot.

My last work, Never Again (2018), was no exception.  For the past five years, I had been troubled by the political process that is systematically stripping women of their basic human rights.  I believed this was possible because there is a general apathy that keeps people from educating themselves on issues and acting on it. Texas Government and religious organizations have systematically blocked women’s right to reproductive healthcare and choice.  I debated on how to best address this issue in a voice that people can hear (I’m not interested in doing the Angry Woman Show.) The solution was by style- Never Again portrayed the Texas Legislation and Women’s Rights backlash through a vaudevillian lens, with dark humor and wit.

POP DEMO, slated to premiere in September 2023, goes further by investigating how propaganda in politics sways public perspectives on the role of government in our lives.